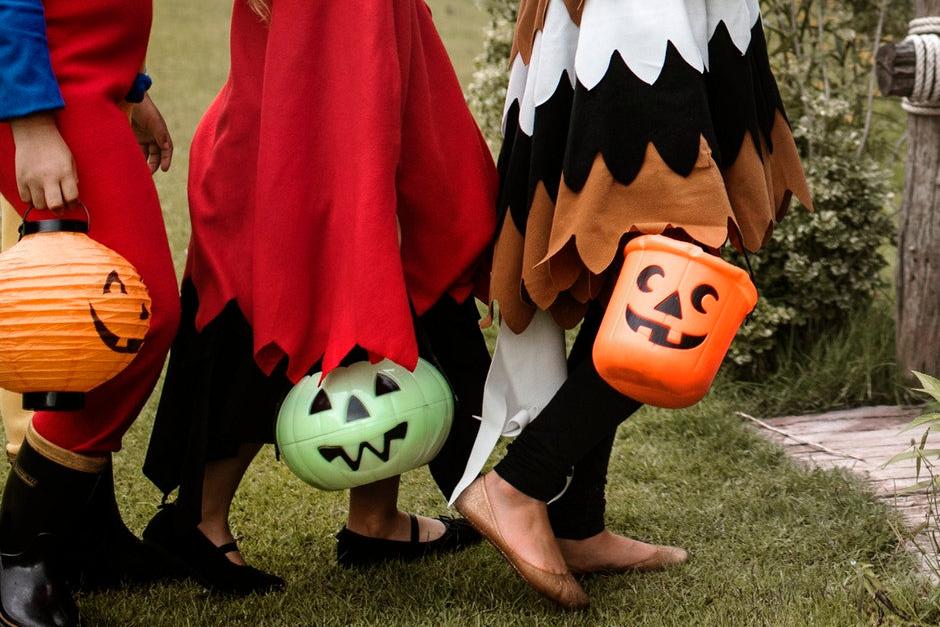 How safe are your kids when they go trick or treating?

Is it a sweet tradition (pun intended – it’s a Halloween thing) for the kids, or a dangerous encounter with terrifying teens, grumpy neighbours or worse? Are there somethings you should be really scared about?

The supermarkets are backed with tubs of chocolates and jelly sweets. There are cheap plastic devil masks appearing in corner shops, ‘warding off’ underage kids who want to come in and buy illegal fireworks.

Soon, the pubs and party-houses will be filling up with people disguising themselves in ‘sexy’ costumes, joke blood and weird contact lenses. Your kids are already planning what they’re going to do with their haul of sugary treats this year.

But, sugar-rushes aside, is it a good idea to let your little ones out and about on the scariest night of the year (barring Eurovision, perhaps)?

The tricky dangers of treats

Every year, the horror stories start to swirl around the tabloids and are whispered in bus-stops and school playgrounds: razor-blades hidden in apples, menacing teenagers in killer clown masks jumping out to terrify suburbanites, poisoned chocolates, kids demanding an Xbox at your doorstep because they’ve put on a cardboard box with the words ‘SCARY’ scrawled across it in biro.

A nice bit of urban horror mythology to set the mood. But is that enough to scare you off from walking around the neighbourhood with your little kids dressed in cute little witch outfits and werewolf disguises?

The clocks have just gone back another hour and it’s getting dark around teatime, so it’s quite exciting for kids to be out and about in the night-time.

If you’re able to gather together a little posse of local kids and some parental chaperons, where is the danger?

What is scary is how flammable a lot of these kids outfits are, especially with all those candles around. Almost as scary as the amount of effort some families seem to be able to put into their detailed, skilfully-crafted scary outfits. They deserve an egging on principle, the show-offs.

A chance to get your neighbours a little bit?

Like most festivals (however ancient, religious or commercial) there is an element of misrule to Hallowe’en; things are turned upside down for a little while as people dress up as monsters (or ‘sexy’ witches) and indulge themselves in the semi-forbidden – booze for adults and, for kids, sweeeeeeettttsss!

Parents studiously spent the rest of the year telling their children to stay away from strangers with bags of jelly-bags, now march their offspring up garden paths of people they never see to demand treats with loosely defined threats.

It’s a touch of Bizarro world, where people let the valves open a little before going back to the drudgery of another month or so until Christmas starts to pick up pace. It’s good for the soul.

The other thing about festivals like this is that they are about community. Maybe if you’re not sociable enough to invite people round for apple-bobbing and a bonfire, you can still put a candle in a pumpkin in your window to signify that trick-or-treaters are welcome.

It’s a rare chance in our era here in Britain to actually knock on a stranger’s door without your car breaking down, so shouldn’t we grab it with both hands?

It’s lovely to see little monsters reclaiming the streets as their parents hang back a little just to make sure they’re okay.

How can kids keep eating sweets so much and for so late into the night? It’s only when you realised how many grown-ups do exactly the same thing with alcohol at Halloween parties that you feel able to cut the spooky sweet-teethed creatures some slack.

If you’re really smart, book them in at the dentist a day or two before, so you don’t have to deal with the guilt of how much decay there is or scare them into looking after their gnashers a little better.

Some people complain about Halloween become overly commericalised with pressure to spend money (or even worse, precious free-time) sorting out costumes for your kids and bags of sweet for your visitors to dip their greedy paws into, but as with every commercialised event, there’s always the chance of a good sale. And our Spooktacular Sale has up to 75 percent off all kinds of terrifyingly good-value items.

Feel free to come and ring our doorbell, either online or at our showroom.

And may the spirits be with youuuuuuuu….