Is it ever okay to smack your children?

This is a question that always stirs passionate debate, based on people’s own childhood experiences, their opinions of their mothers and fathers, and their own struggles or successes as a parent.

Many people wonder how it is even a debate. Parents know kids learn by example, by what they do and not by what they say. Parents are big and wise; children are small and impressionable. How can even the most judicious application of physical force be appropriate?

Some people, they say, should be banned from having children.

On the other hand, many people feel that it is quite normal for children to get smacked sometimes, that every mum and dad gets stressed by their kids some time and it’s unrealistic to expect any different.

In Britain, it is illegal to hit a child (as it is to hit an adult) but in England, there is the legal defence of ‘reasonable punishment’, which applies to parents or privately hired nannies or babysitters with parental permission to administer corporal punishment. Parents in Scotland and Wales are not lawfully permitted to smack their children under any circumstances.

Over 50 countries across the globe have made it illegal for anyone to hit children. However, as soon as the topic comes up for debate in Britain, tabloid headlines, radio phone-ins and everyday conversation in the street show that many, many people in the UK are not quite ready for smacking to be banned.

One famous case of corporal punishment was the fatal beating of a 15-year-old boy at the hands of his teacher in England in 1860, an incident that became known as the Eastbourne Manslaughter. This established the legal precedence for ‘reasonable’ force, which then passed into common law and as a result is still the legislation in many former colonies of the British Empire.

One study shows 20 percent of parents in the UK have admitted to smacking their children, but it is almost always in a moment of ‘losing control’ and not a soberly administered slap across the back of the legs or backside. The fact that parents are often not in their best judgment when they decide to punish suggests that they know it’s a mistake and something they quickly regret.

In terms of the law, the most vulnerable (both physically and emotionally) are the least protected.

Where is corporal discipline illegal?

Sounds as though you were lucky, as there is a large body of research that shows a vicious circle of antisocial behaviour and corporal punishment leading to more antisocial behaviour. The vast majority of research on the subject seems to show that setting positive goals and boundaries is a far more effective way of shaping a child’s moral development.

Many things were considered quite normal in years gone by, even healthy, which are now thought of by many as completely unacceptable – drink-driving, racist language, rock stars with under-age groupies.

Comic strips from the 1970s and 1980s regularly featured the risk of slipper or cane: it went with the territory of being a rebellious schoolkid. It seems, though, that the ideas of what is normal have moved on and, globally, this might be the case with children and corporal punishment.

Someone might feel that being punished with a clip round the ear as a kid did them no harm, but it did apparently give them the idea that it’s okay to smack children.

Being responsible for the growth of one or more human beings into well-functioning, healthy individuals is massively demanding, every single parenting decision seems to have enormous consequences, and it is incredibly easy to feel guilty or defensive about even the smallest mistake.

However, even though parents are legally and morally obliged to take care of their children, sometimes the attitude sounds more like ownership than guardianship. Is part of the problem that many people feel as though their children somehow belong to them, extensions of themselves rather than independent, smaller human beings?

A complaint often made by opponents to banning parenting smacking is that it will mean the state interfering in a perfectly normal, loving family and bringing about more emotional distress than the original incident. However, there seems to be no evidence that this has happened in the many countries that have recently made corporal punishment illegal in all respects.

In fact, these changes are generally used as public education tools rather than an attempt to criminalise the parents.

I’ve smacked my child and they are perfectly normal"

Even the most committed opponent of corporal punishment would recognise a difference between regular, violently abusive behaviour and occasional physical punishment in an otherwise loving and stable family environment. At the same time, reactions from the little ones are difficult to predict: sometimes the aggression that they encounter is internalised and manifests as mental health issues later in life.

The overwhelming majority of studies show that even one incident of physical punishment can have an impact on a child’s sense of trust and security.

Children rarely seem to follow exactly the same developmental pattern, even within the same family. This is one of the key battlegrounds of the nature/nurture debate. However, there may be a couple of factors that explain some of these differences.

For example, there are signs that there might be a genetic element – Monoamine oxidase A (MAOA) is an enzyme that plays a key role in the catabolism (breaking up) of neurotransmitters like serotonin and has been linked to increased aggression. Children were assessed annually in one study from the age of six until they were 22, and it was found that boys with high levels of MAOA responded more violently to corporal punishment than those with lower amounts.

Spare the rod, spoil the child"

It may be that you feel the threat of slapped legs kept you on the straight and narrow as a youngster and made you the sober, responsible, caring adult that you are today.

On the other hand, there is a large pile of research  that suggests physical punishment makes no improvement in children’s behaviour at all. 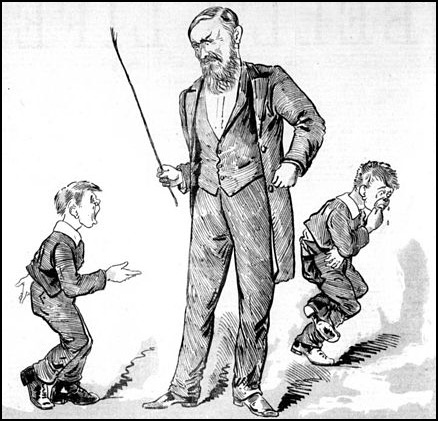 Punishing unacceptable or challenging behaviour physically may seem a proportionate response at the time, but there is often some anger involved, which could easily distort parental judgment. Children will become more aggressive and antisocial as they struggle to deal with powerful emotional responses if those emotions are met with anger or disapproval from their parents.

Perhaps the most disturbing result is that children will learn that disagreements should be resolved physically, which is not something that will be very helpful later in life.
Even if it does seem to get results in the short term, this might be one area where the parenting rule of ‘If it works, do it!’ should not be applied.

It’s PC nonsense. Soon, you won’t be able to do anything to discipline children. Kids today have no discipline!"

If you think a ban on smacking is outrageous, there are many people out there who believe it doesn’t go anywhere near far enough. Children have human rights and it is wrong, they claim, for them to be treated with any less consideration than adults are. After all, even though small children might not have all the cognitive skills of a grown-up, emotionally we probably aren’t all that different, are we?

There are parents who practice what they call respectful parenting, which involves asking the permission of children to give them a hug, pick them up or even changing a dirty nappy.

This is the kind of story that more sensationalist news sources go nuts for, but the idea is a timely one in that it is supposed to encourage a culture of consent.

Research into workplace behaviour indicates that people act in much more desirable ways when they are happy and that happiness comes from a sense of being valued; there is not much evidence to show that motivations like more money or a nicer office do much for workplace happiness without a sense of being listened to.

Ideally then, children are given some choice, some freedom, in order to work things out for themselves and therefore develop intrinsic motivation, their own ideas about why they should behave in an acceptable way and what benefits that will bring.

The idea that this is a far more effective way of modelling desirable behaviours than either a stick or a carrot. Some argue that this gentle parenting approach is far more effective, but there are many parents who will shake their heads in disbelief when they imagine trying to apply the philosophy to their own families.

Unsurprisingly, there is a broad spectrum of ideas about how to bring up children – roughly one different philosophy per parent, running into the billions. How could we ever be expected to agree?